My day was pretty typical, but for some reason most of us teachers just felt off and kind of sad. My co-teacher thinks it’s a mix of the weather and being so busy with report cards looming. I actually thought of looking for cheap flights for the long weekend this weekend🤣

I had my alarm set for six this morning to get a run in before work, but I was still needing more sleep so today became my rest day:(. One of my goals for February was to exercise for at least half an hour a day, so I suppose I’ve just botched that one!

It was such a busy day as we are gearing up to make sure we’ve covered everything before we have to start writing report cards. It made me a bit grouchy, but we did end up accomplishing everything on the list so that’s good. I’ll reward the children tomorrow with some Centre time.

I rushed out of work this evening to get to my massage appt and from there I decided I should hit the grocery store. Maureen had included a recipe the other day that screamed cold weather comfort food to me and since its cold and wet I grabbed the ingredients. It was very easy to make and only took a few minutes to cut up the potatoes, peppers, sausage and celery and get them into the oven. Even better the thirty minutes in the oven gave me just enough time to tidy my place for knit night tomorrow. It was an easy recipe to ensure was gluten free and dairy free and I think it would work well with whatever veggies you have on hand. It tasted awesome and it will give me five more meals! 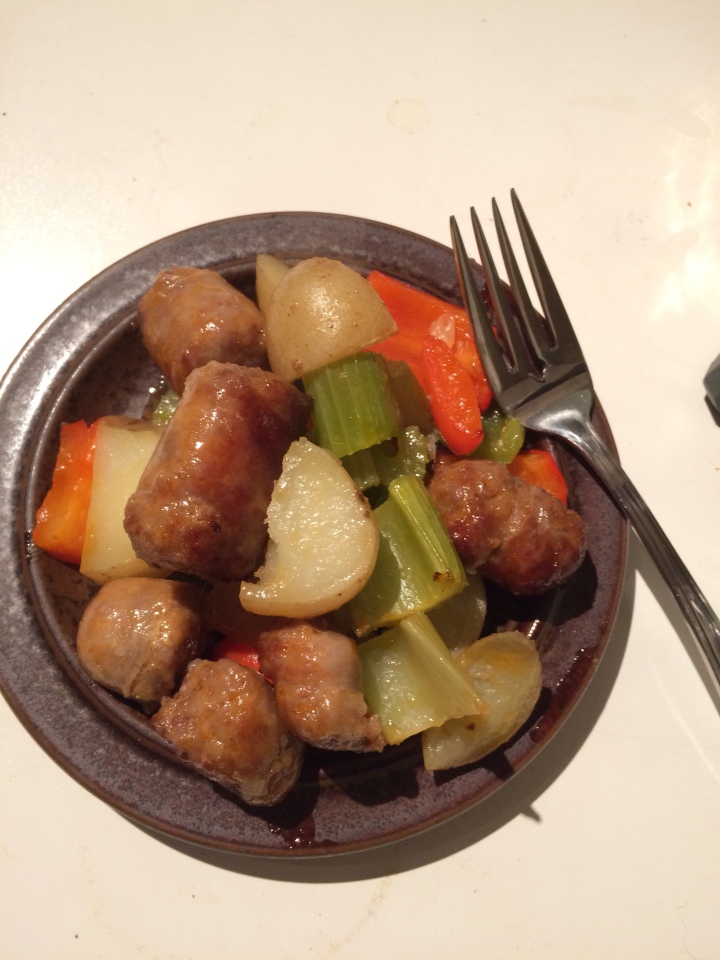 I finished another project which I’ve been meaning to do for a while. My friend Brenda has been making Izzy dolls which the Canadian army distribute to children in other countries. It seems like an awesome cause and I wanted to help so today on my lunch hour I started an Izzy doll. I have to admit I was just using up leftover yarn scraps, but even so I don’t think Brenda will be asking me for any more. I think perhaps I should stick with wearables! I did get to enter it into the HPKCHC class for trying something new as I had never made a doll or toy of any kind before.

As I was knitting and sewing I listened to a few more chapters of Wives and Daughters. I’m happy that I seem to finally be making a little progress:)

I’m also over halfway through a chick lit book so I’ll hopefully be done that tonight or tomorrow:)

Well I think I’m off to curl up in my bed with my book:)