I had a different title for this post, however, my day and the post changed in a moment, or a bite:)

I went this morning and met up with the usual suspects for a trail run. I ended up just walking as the Squad Runner mission was finished and I knew I’d have to run later in the day again. What a mistake this decision was!

About 1:45pm the snow started unexpectedly. I laid down for a nap, thinking I’d be able to get out for my run just after three as I had planned. Well I woke up to a winter wonderland of snow everywhere!😖😫

Its of course not enough to cause a snow day tomorrow (I’ve only had 2 in 33 years in this district), but just enough to bury the sidewalk and keep me from running:(. There goes a mission:(

I finally gave up and did a home workout this evening. A warm up- then 30 reps of: shoulder press, bicep curls, squats, dips, plank jacks, speed skater lunges, upright rows, and reverse crunches, then 3 minutes of skipping. I repeated it again with 20 reps and 2 minutes and again with 10 reps and 1 minute. It wasn’t a run, but it was at least something.

I spent the morning getting my food ready for the week- oatmeal and a grilled veggie and chicken salad with Greek dressing- and then got to read in front of the fireplace.

I finished the school Bookclub book- The Unlikely Story of a Pig in the City by Jodi Kendall. It was a quick, easy and enjoyable read. It is about a girl who is 11 and finds herself trying to find a home for a pig in the midst of all the angst of her regular life in a big family. It was relatable and I think kids, especially girls aged 9-12, would enjoy it.

I have to admit I was having a difficult time dealing with the change in my plans and no run and so I flipped through Instagram. I saw a post about gf/df cinnamon rolls and of course they claimed they were the best. I love cinnamon buns and have tried many many recipes searching for one as good as I used to eat. Usually after trying these recipes, I’m upset that I wasted expensive gf/ df ingredients on them. Not so with this one! OMG these cinnamon rolls have the texture of a normal cinnamon bun. They are easy to make and so good! I found the recipe at Living Freely Gluten Free and I would recommend them to anyone and everyone!! The only change I made was to use a mixture of Bob’s Redmill All Purpose GF flour and Robin Hood GF Flour and I added raisins. I’m not sure I’ll eat anything else this week. Thankfully I immediately iced them and put them in the freezer, so I’ll wrap them tomorrow when I have more willpower:) 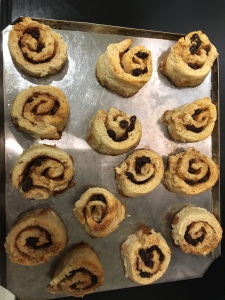 This image really doesn’t do them justice as they aren’t dry or crumbly!

On and off between looking out the window, I have been knitting today. I finished the heart handwarmers last night and got them to Brenda to donate to the hospital.

So today, I began a little girl’s vest. The pattern is from Timeless Knits for Kids by Chris de Longpre. This is the same book the orange sweater pattern came from. This is the final chance for this book and considering I had to go from the called for 5.5mm needle down to a 2.75mm needle to get close to gauge, it’s not looking good:(. Who gets 19 stitches per four inches in worsted weight yarn?!

I’ll let you know how it turns out.

Well that’s it for me tonight. I’m off to bed to hope for a miraculous snow day!

33 thoughts on “Changed In One Bite”