It was a lovely day and a better than expected evening.

Once again, I really didn’t want to run this morning, but I also really want to get caught up on my goal! I did finally get 4.25km done again after sleeping in for almost an hour. That is unfortunately the only exercise I got today:(

I hopped in the car and headed downtown to spend the day window shopping with one of my oldest friends. It was a lot of fun and I managed to buy nothing:)🤣

We tried a new restaurant for lunch. It has been open on West 4th for about 8 months and is called Gobble. It has a great clean, fresh atmosphere! I really like the concept of build your own bowl. You choose a protein, two bases and a sauce and they put it together for you. They had lots of options of protein, including vegan and some interesting sounding bases and sauces. My friend got a lentil and a potato base with pork and then Smokey honey mustard sauce. It looked great and she said it tasted good too. I thought the bowl might be too much food for me so I went with a vegan, gluten free savory tart. It was very yummy!!! It was great because the woman made the tarts herself so she could tell me exactly what was in them:) I need to make some of these! 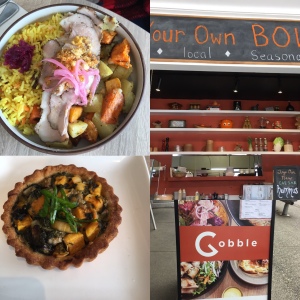 I will definitely have to go back as the woman said they are going to start having vegan, gluten free strawberry cheesecake next week!

We also stopped at a new coffee shop called Their There later in the afternoon. I had a chai latte that was kind of powdery and my friend had an ice mocha and a cronut. She said the ice mocha wasn’t great, but the cronut was delicious. I’ll have to take her word for it:)

Throughout the day we had visited a few different bakeries as I was looking for a lemon meringue pie for my dad for his birthday. I can’t believe no one had a lemon meringue pie! I finally ended up with silly bars for him. I did stop on my way home and deliver the dolly bars and a hug. He was off for fish and chips with my aunt and uncle.

This evening I had to attend my Strata AGM. It wasn’t as horrible as I expected, but my least favourite resolution won. I think I live with a lot of short-sighted people!!!

I had to giggle to myself how quickly I can make a judgement about a person. When we were electing the new council a woman nominated herself and I immediately thought – “nope, she’d be a pain to have on council”. When she later spoke, it really did cement my initial judgement. I just hope others felt the same!!!

While I was at the meeting all I really wanted to be doing was knitting. I am more than halfway through the yoke of my sweater and am determined to finish it tonight!!!

I must go and knit!