Today was my favourite type of day- good friends, activity, good food and a little step outside my comfort zone. It reminds me how my students feel when I ask them to do something new:)

I met up with three of my work friends and we bikes between Derby Reach and Fort Langley. It said twenty minutes on the internet site, but we weren’t racing so it took forty five for us.

I was nervous about going as I have never done this type of biking- usually stick to trails or the dykes, but I figured if I was ever going to try more, this was the group to do it with:)

It turned out great as even when we were “on the road” we were actually on a nice little path beside the road that was separated by a wood fence.

Once we made the journey out there, we stopped at the Trading Post Brewing Company for lunch. Contrary to the name, they do have food and not just beer. I split the Farmers Falafel Bowl and the Prawn Tacos with my friend Sue and they were both amazing! I also had a glass of sangria, but I had to ask for more simple syrup as it wasn’t very sweet.

I have to say that none of us were very impressed with our waitress- she was snarky:(

We then made our way back to Derby Reach Park where we had parked. I did better on this ride than I expected and actually successfully used my gears to get up most of the hills. I had one hill each way that I ended up walking, usually because they were very short and steep and came as a surprise. By the end of the trip, I already felt a little more confident on my bike:)

Though note to self- get on finding those padded bike shorts! 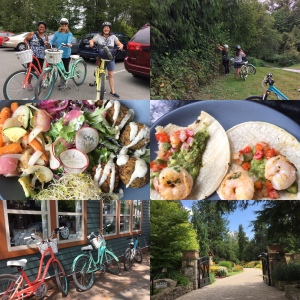 When I got home, I had a little nap and then decided that I had to do my run for the day. My run went amazing! Maybe I should bike beforehand more often! I had an average of 6:28/km which I am happy with:)

I finished up the body of my current sweater and now just have to do the sleeves. I’m thinking I might just split the 70 grams I have left in half and knit until each sleeve has used 35 grams. I’m really not sure about this sweater though- it looks really small:(. I wanted to knit two sweaters this summer and if I have to rip this one out, I’ll never make it:(

I knew I had to get going on using the blackberries I had picked as they won’t last until I get back home, so this evening I made two batches of blackberry jam. The first was low sugar and included cinnamon and allspice. I like that it was different and hopefully it tastes good! The second batch was a much more normal berry/sugar blend. I still need to make about another two batches to use up all the berries.

Today was better for eating, though I am feeling kind of pudgy tonight:(

Breakfast- crackers and cheese so that the crackers are gone from the house!

Well I just realized I could make some blackberry muffins with some of the berries so I may go do that:)

32 thoughts on “Outside and Active”