It was awesome to have knit night to look forward to today.

It was another good day with my class which was a nice treat. We didn’t get as much done as I wanted to, but I need to lower my expectations in that area, I think.

We had calendar, finished out five senses sheet about Fall, and started some leaf art.

I managed to work with one little guy on his sounds. I laid out all the alphabet cards, then said a sound and he had to find the card that made that sound. It worked great, but he only knew 14 sounds:(. Definitely need to work with him more!

I did get to give one parent good news after school as her son has been super sweet playing with our new autistic boy. It’s been awesome to see! I like to try and get out just as often to tell parents good things as negative things.

I got out for a run after school. I love that this week I’ve had the time to run in daylight after school:) I got 5.79km in and had a decent pace, though my Achilles were both sore:(. I need to do some more stretching for them! 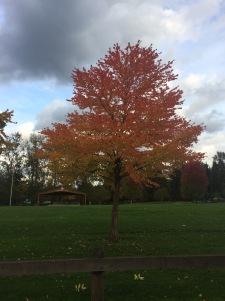 I had another good day, though this morning was definitely more difficult than the other days. I seriously thought of eating my recess early and having oatmeal in addition, but I managed not to:). I’ve had:

Salad with sausage and cheese

I just arranged to take my nephew for ice cream on Friday so I guess that will be one of my four treat meals this week. Yes I did sit down and figure out that 80/20 meant only four “treat” meals a week. I’m going to have to plan carefully as I’ll also be having lunch out on Saturday. The rest of my days are going to need to be fruits and veggies based!

It was great to have knit night resume. I went to Brenda’s and we actually had a third lady join us which was great. Patti seemed awesome and will be joining us on Saturday too:)

I worked on my triple check knit pattern. I think I will just have enough to create a cowl. We all agreed it would also make a really nice blanket.