It was a tough day cause they called another indoor day at lunch.

We did more work for our report cards today. The kids did their perspective and told me about who their friends are, what they like best at school and the most interesting they’ve learned so far this year. It was real interesting!

We did a couple of math games and then I had a prep.

This afternoon we tackled rights and responsibilities again as I didn’t feel like the kids really got it.

I left work early and went for a run with Dennis. We were supposed to be doing an interval workout, but instead we did a tempo run. I hit a 5:57, but was definitely feeling eating at 3pm.

I managed to finish the socks! I had to change the toe of one because I was running out of yarn. 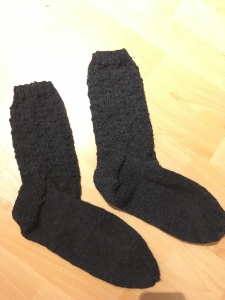 This is the Brookline socks done in Kroy socks in gray. I really do love this yarn for reasonable socks.

There were five of us for trivia tonight. In the first round we knew:

What three countries start with F?

Who wrote the Handmaid’s Tale?

What card has to appear if you have a perfect 29 hand in crib?

We did okay in the Kahoot round and came in second?

Which South American country has the largest population?

In which film did High Grant play a book shop owner?

What are the names of the two characters in Outlander?

What is the song contest throughout Europe?

What key is beside the l?

We actually won the last round!

So that’s it for me!