I’d love to say I was as productive as yesterday, but it just wouldn’t be true. I’m blaming it all on the book!

It’s hopefully the last week that my morning run turned into a walk as I didn’t want to leave Brenda alone. We did the entire Coquitlam River so it was a good way to start the day, especially as Brenda walks very briskly.

I worked out this evening with another Lyndsay routine. After a warm up of running, skaters, jacks, side shuffle and skipping that wore me out, I did:

2 sets of: dumbbell press with squat hops, side lunges, plank taps to burpees, lunges to deadlift, bench push-up to leg raise, plank with leg raise up and to the side, squat jumps to pulsing squats, single leg hip lifts.

Then 2 minutes- first one skipping and the second jumping jacks.

Then 1 minute of each of the following: bench tricep press, wall sit, mountain climbers, band pull downs, and dumbbell swings.

Finally the torture ended with abs, 30 seconds each of: bicycles, Russian twists, right side crunch, left side crunch, full sit up

After that I ended the evening with a short run. I really didn’t want to go and had given myself permission to only go to the park and back, but surprisingly I felt really good. I still only did 3.75km🤣

After my walk and tea this morning I stopped by the farmer’s market and picked up my Black Sheep Vegan Cheese. I was so excited that they were close to home! I have to admit I bought one of each kind they have, though I was disappointed they were out of camemvert.

That’s my very large brown paper bag of cheese in the centre:)

I also went and picked up my friend Kathryn and we hit the Gourmet Warehouse. This is always a scary stop for me and I definitely require supervision. I really wanted to get an angel food cake pan, but they were sold out of it. I wanted to get wonton wrappers, but they only had rice paper. I also wanted to pick up canning jar lids, but they didn’t have the kind I need. I ended up being very good and only buying some sugar free vanilla syrup (I am on holidays so my tea should be special) and some butcher block oil for my charcuterie board. I was tempted by the Le Creuset and the cookbooks though!

I got another batch of raspberry jam made today. It went smoother than yesterday. I think I need to make one more batch to get me through the year. After that I will just freeze the rest of the berries. I have to stop tomorrow and get more jars though.

I spent a lot of today reading, I Flipping Love You by Helena Hunting. From the first page this book grabbed me and it never let go! It was such a good read. The plot is very fast paced and yet it seems to suit the characters.

The characters are realistic and interesting and the banter between them is great! I laughed out loud a few times and I have to admit I always love it when the female lead isn’t a pushover.

There was enough background given to have scenes and dialogue make sense and yet we weren’t inundated with “head stuff” or character’s thoughts.

I also liked how the narrative switched between the two main characters so you got to know both sides of the story.

This is an excellent beach read and is highly recommend it if you want something fun.

What have I eaten today???

10 slices cucumber with cheese and 11 cherries.

Green beans with everything but the bagel seasoning on them

Raspberries as I was cutting them up for the jam

Not the best, but not horrible. At least my fridge is starting to empty out. I like it a lot better when there’s minimal food in there!

Well I don’t know if I’m going to start another book or some knitting, but I’m off.

A busy day that rearranged itself into a quiet day. I was supposed to go for a run and lunch and then shopping with another friend, but…

I slept in this morning and didn’t wake up until 8am. I never put an alarm on as I don’t normally need one but I may have to start using one for Saturday morning. I felt it was too late to go do the crunch as it gets super busy there so I said goodbye to the cinnamon roll for today. Lately I had been thinking about the step aerobics video I used to do daily when I first started getting fit in university. I decided to try it out this morning. I popped it in and did the whole thing. 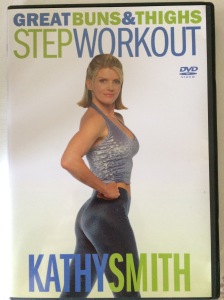 I was warm and glistening but not dripping sweat like I usually am after a bootcamp workout. It was nice to know I’ve improved in fitness over the past twenty years 🤣

Later this afternoon my running buddies joined me for a run around Coquitlam River. I have been wanting to run here as it’s beautiful when the leaves turn colour and fall, but there really weren’t any picturesque spots yet:( I had to make do with these photos. 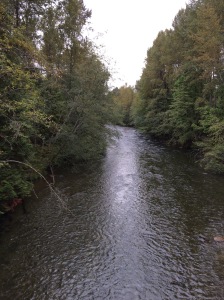 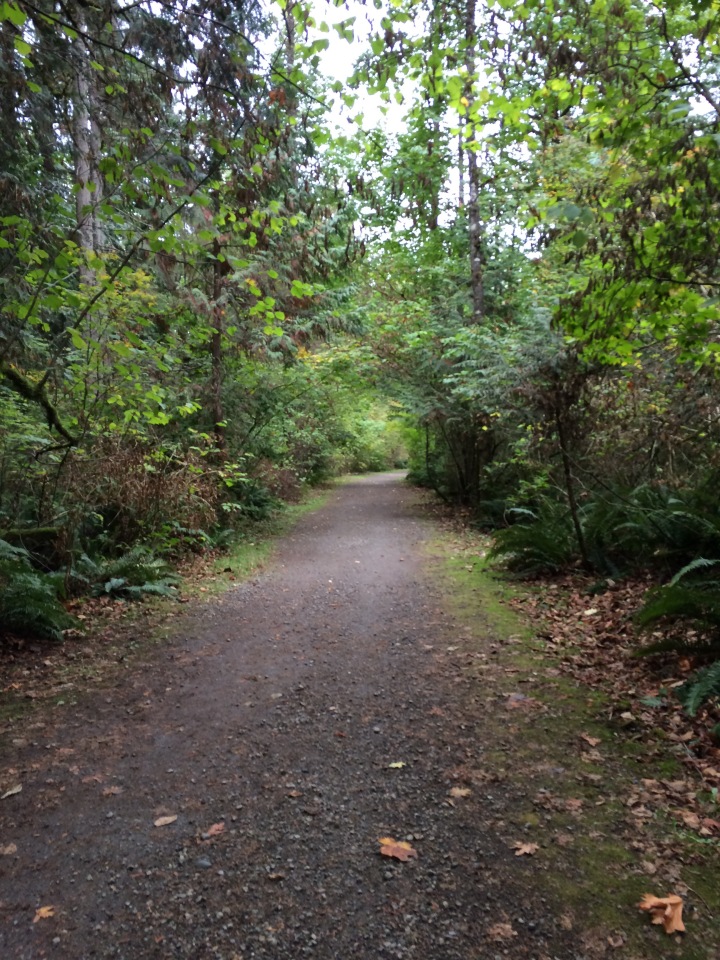 Kula had been at doggy daycare so we didn’t know how far we’d make it before he refused to go any further but we actually got all the way around- a 5km run. At the end we saw this cute signboard on the fence. 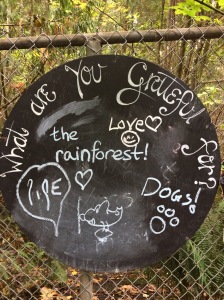 He is getting better at being a running buddy every time we got out though he still provides cross training in the form of jumping over him as he cuts you off😂 He was definitely tuckered out by the end! 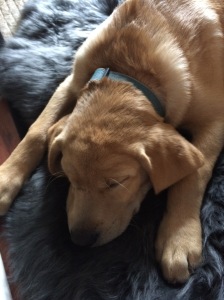 I finally finished all the Thanksgiving leftovers (but not the turkey soup yet) and got the chance to try another one of the Vegan cheeses my mom had brought me from the Oliver Wine Festival. I tried the smoked Gouda this time. It was again a little slippery to the touch and the flavour was light, but still quite delicious. Would be great with an apple in a sandwich as it’s not a strong taste.

So far, I’ve been impressed with these Vegan Black Sheep cheeses!

I also had the chance to go out for sushi today with my human running buddy. Kula decided to stay home for a nap instead 😂.  I’m lucky Sarah was willing to drive to Maple Ridge so we could go to Wasabi Sushi which has a huge gluten free sushi menu:)

I managed to decide on the salmon avocado roll, the BC roll and the Botan Ebi nigiri. It was all so delicious! 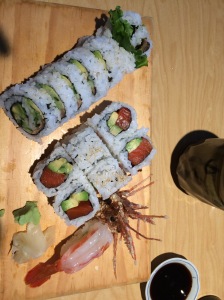 I highly recommend this place! It’s even nice enough for a date:). The only thing was that tonight they made a point of bringing me gluten free ginger; I didn’t realize there could be gluten in pickled ginger. I’ll have to look into this.

I finally did something useful today and organized my circular knitting needles. When I checked Pinterest for ideas on how to store them, I liked the CD case idea, but settled for the page protectors I already had. I’ll have to bring home a binder from school on Monday.  Is it weird that I wish I could buy new circular needles to replace some of mine just so that they would be in their original packages. I’ve now learned to store my needles in the package they come in, but I have to admit I didn’t always know this and now I regret it😞

I also got the yarn organized that has been piling up in the basket beneath my coffee table. It was a real wreck and was getting out of control! 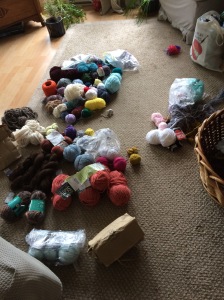 It is now a lovely organized basket:) If anyone has any pattern suggestions for what to do with multiple small sock yarn ends (less than 100 meters and some as small as 20 meters), please let me know, otherwise I may need to garbage them.

I have started just a plain pillow cover for my mom as she was right when she said that a pattern wouldn’t show up with the fluffy yarn I’m using (sometimes I hate how she’s always right lol). Hopefully I’ll be able to show you a finished product soon!

You may have noticed I had an unusual blog post earlier today. Abbey at Three Cats and a Girl (an amazing reader and interesting person so check out her blog) had tagged me in a reading blog and I finally got it finished today. It was a tough blog post! First I had to learn how to tag people, then I had to figure out the answers. That was quite the task as I’m not great at remembering what I’ve read.  I had Goodreads to help me, but I’ve recorded 1152 books I’ve read on there so it was still quite overwhelming. I never did learn to cut and paste so I had to retune everything on my phone which took a lot longer than it probably should have. It was an interesting experience and really made me think so probably a good thing!

It really worked last night writing about my book club book as I got a few chapters read and am now almost 1/3 of the way done. I’m hoping to get a few more chapters read tonight. Perfect night for it as it’s cold and dark here!

I’ve had pictures from my Boston trip printed for a while but haven’t written the date on them yet so they can be deleted off my phone ( the whole point of printing them!) and today I finally asked myself why?  I realized it was because I have pictures printed and dated from my last three trips that aren’t in albums yet and I want to get them dealt with first so I don’t get all these photos confused.  So here I sit organizing the photos from my trip out East in May for my friend’s wedding.

I don’t know if I’ll get them labelled tonight but they will at least get put into an album today:)

With knitting, reading, album making and laundry to do tonight, I had better get going!