I had a bad night after being a piglet at Bookclub so it was a tough morning.

I was supposed to get up at six for an 8km run, but instead I slept until 7am! This caused me to get absolutely no exercise today as I had a massage after school:(

The exciting things today were that we wrote summer bucket lists in Journals today. The children did very well, and I got quite the list going when I was giving them an example. 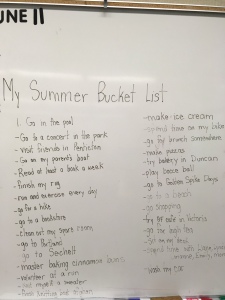 Their ideas gave me ideas and it was funny to hear how they really weren’t outlandish in their wishes- only one person said they wanted to go to Disneyland, everyone else was talking about water gun wars, parks, etc.

We spent the afternoon with three other classes doing more ADST. We had the children pair up and then decorate/colour a piece of paper on both sides. They then got to fold the paper into an airplane and take it outside to fly it. Again, the session went really well and the children were totally engaged!

It got really fun when the wind came up too.

After my massage I grabbed my mom and dragged her along to Costco with me. Chores and errands are so much better with company! I didn’t buy anything for me- just the fruit snacks, ziploc bags and Lysol wipes I need for school. At least it’s done and I can quit trying to remember that I need to pick those things up.

I have done an hour on the rug tonight in the hopes of not having to do hours on it this weekend. I’m starting my second to last row so there may just be hope of finishing yet.

I have started listening to a new book on LibriVox today. It is Great Expectations by Charles Dickens. I have the feeling I’ve read it before, but since I don’t remember it, it’s obviously good to listen to it again!

Well I’m off to bed super early as I’ve done nothing but yawn all day today!